I just tried to close-vote this question as needing migration to Computer Science, but there was only one option in the Migration UI and it was CSE itself 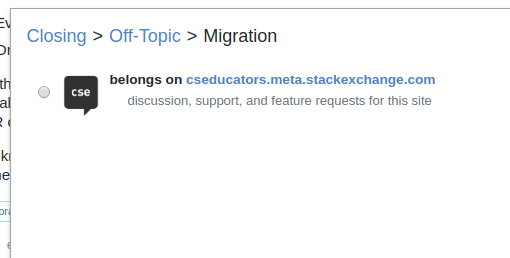 So... it appears the migration options for this site haven't yet been populated(?)

I would assume that at least

Until then, you can flag for moderator attention and ask them to migrate it to some specific site

and in the box describe why and to which SE this should be migrated.

Migrations are difficult to get right, so generally it's easiest just to leave a comment to let the OP know that they're not in the right place, and suggest re-asking at the correct site.

If you're certain that:

Then cast a flag for moderators. If you're in any doubt, though, it might be easier to just close the question as off-topic here.

Recent policy seems to be headed away from migrating questions much at all, but it can still be useful. In the past, there have been issues from incorrect migrations (mainly through the vote to migrate system, which doesn't apply for this site) that caused tension between communities. But equally, it can be a useful tool to get great but misplaced questions to the correct site.

In short: flag if you're certain the question is off-topic here and on-topic somewhere else. Respect the community to get the most out of migrating questions (or recommending that a question is migrated).

Not the answer you're looking for? Browse other questions tagged support feature-request .